The Hearst Tower is Hearst Corporation’s new global headquarters and the first New York City landmark of the 21st century. The 850,000 square-foot tower has won global accolades for its innovative and environmentally sensitive design, and is New York City’s first occupied green office building granted the Gold LEED rating by the U.S. Green Building Council. The Hearst Tower, which had its grand opening October 2006, is home to over 2,000 employees. 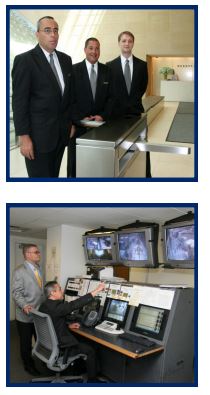 Hearst Tower has a high volume of visitors, including many VIPs and celebrities. Keeping the building’s fashion-forward occupants safe and sound was a top priority of Brian Schwagerl, Vice President of Real Estate & Development, and Bernard Shaw, Vice President and Director of Corporate Security for the Hearst Corporation.

In June 2006, the company issued a request for proposal from several leading con-tract security companies. “We were looking for a security firm that could provide well-trained officers who are committed to continual self-improvement via education and training,” said Brian Schwagerl. “Security officers are the very first people that our employees and visitors see when they enter the tower and it is of paramount importance that they are friendly and professional,” adds Schwagerl.

“It was important that the security company we hired had a sound work ethic, a professional appearance, strong interpersonal skills and a commitment to training,” said Bernard Shaw. “In addition, we needed to ensure that we hired qualified officers who act in a courteous manner to all visitors and employees without being star struck or intimidated. Celebrities pass through this building on a daily basis, and we need our officers to treat them—and all of our 2,000 building occupants—with civility and professionalism.”

Hearst Corporation quickly selected Allied Universal Security Services as their contract security provider for the tower. “Allied Universal’s commitment to training as demonstrated with the Allied Universal Academy was a major reason they were selected,” said Ted Lotti, Deputy Director of Corporate Security and retired NYPD Captain. “They place primary importance on providing their security officers with up-to-date and comprehensive training in the physical security sector. By offering both virtual and classroom training programs, they can ensure our security officers are well-versed in a wide variety of tactical and strategic information.”

Working closely with the Hearst Corporation, Allied Universal had to ensure that their 43 full and part-time professional security officers could effectively deal with the glamorous media culture in a world-class, high-profile, iconic building. In addition to security being the first line of defense with officers on post assignments throughout the building and loading dock, the Hearst Tower hosts over 200 high-profile events a year. “We actively recruited the crème de la crème of security professionals,” said Caress Kennedy, Vice President and General Manager for Allied Universal’s New York office. “We seek career-minded security professionals who are customer service focused and committed to training and education.”

“Prior to hiring Allied Universal, our special event group hired outside consultants to handle security for events,” said Lotti. “Today all of our events, whether they are for internal or external audiences, are handled by our dedicated security team.” Special events at the Hearst Tower range from fund raising celebrations for non-profit organizations and museums such as The Whitney Museum, The Nature Conservancy and the Riverkeeper, to movie premieres and magazine events.

“Ensuring that we deliver customer-centric, professionally attired and well-trained officers to the Hearst Tower is of paramount importance,” said Kennedy. “Our officers are interfacing with every level of management within the Hearst Corporation and are the first people employees and visitors see when they enter the building. Hearst has a respectful and inclusive culture where everyone cares about each other. We created a specialized customer service training protocol for our officers.”

“A commitment to training and education is important, and I expect these officers to want to continually improve themselves,” adds Lotti. “I’m pleased to say that our officers are exceeding my expectations. We have an officer attending law school, one who earned a Master’s Degree, and a large number of officers attending college as well as graduates. We also have many officers with military and law enforcement experience.” The Hearst Corporation has supplied a computer in the Security Command Center dedicated solely for the officers to access the Allied Universal training website, Allied Universal Academy.

Additionally, The Hearst Corporation and Allied Universal have arranged for all of the security officers to attend the New York State Homeland Security Enhanced Security Officer 40-hour training course. Half of the staff completed the course in the spring, and the other half will attend in the fall. Not many companies can boast that their whole security team has received this type of training.

“Our professional development program for our officers includes Master Security Officer accreditation, fire safety and ready response, and preparing our officers for supervisory roles,” adds Kennedy. “We are committed to increasing our officer wages to reward good performance.” The Hearst Corporation places recognition on the security team by spotlighting a Security Officer of the Month.

“We think of the Allied Universal Security Services staff as part of the Hearst Corporation family,” adds Shaw. “They are completely woven into the fabric of our company’s culture and we honor and respect the work they are doing.” In return, there is an evident sense of dedication and commitment to the Hearst Corporation.

While high staff turnover is often a reality in the contract security services world, the Hearst Tower security force is stable, with less than 10% staff turnover in the past two years. “Allied Universal keeps good people longer by enhancing the retention with training, promotions and career development opportunities,” adds Kennedy.

Off-hour surprise inspections are conducted by independent and objective supervisors that perform quality assurance inspections. “These inspections help keep everyone on their toes to avoid becoming complacent,” adds Lotti. When VIPs ask to get the “grand tour” of the 44-floor tower, it’s an Allied Universal officer who shows them the way. Our officers love working here and appreciate our family culture. They took it upon themselves to learn the history of the company and enough information on the tower to become great guides. “That’s reflected on every tour they give, and in all the rigorous work they perform for us 24 hours a day, seven days a week,” said Lotti.