Event Security in Our Nation's Capitol

As one of the most defining architectural designs in the DC cityscape, the Newseum sits on a prime location at the intersection of Pennsylvania Avenue and Sixth Street NW, between the White House and the U.S. Capitol and adjacent to the Smithsonian museums. It has become one of the most popular sites to visit in the area, and within a year of its opening, 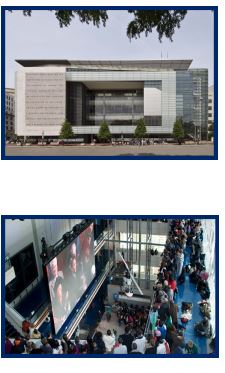 The Newseum features 14 main exhibition galleries on seven levels, exploring news history, electronic news, photojournalism, world news and how the media have covered major historical events such as the fall of the Berlin Wall and the Sept. 11, 2001 terrorist attacks. Additionally, 15 theaters, two high-definition television studios and retail spaces offer a unique environment that takes museum visitors behind the scenes to experience how news is shared with the world.

The Newseum has played host to numerous special events, including many during the 2009 Presidential Inauguration celebration.

When the Newseum neared completion in early 2008, museum officials were looking to develop a security program that could take on the challenges of a high profile, high traffic facility. The security team would also be responsible for visitor safety and an additional layer of customer service. Some of the nation’s leading news anchors, politicians, ambassadors and entertainers would soon be visitors.

“We were looking to develop a security program that would offer us more than just the basic security officer,” said James Thompson, Newseum Vice President/Operations and Deputy Director. “We wanted to find a security services provider that was willing to work with us, implement the rules, handle issues and provide excellent customer service.”

Allied Universal began providing security on Jan. 25, 2008, just a few short months before the facility opened on April 11. Allied Universal ’s extensive recruiting and training resources allowed for a security team of 46 full-time officers to be operating effectively and integrated with the Newseum staff in time for the opening.

“Allied Universal ’s team had the experience we needed,” said Thompson. “They were willing to work with us to develop a top security program specifically for our building.”

“In this high profile facility, you can have a dignitary come through the door any day of the week,” said Daman Toth, Allied Universal District Manager. “It was important for us to establish a professional security team who could take on this role and develop relationships with the client and the visitors as well.”

The planning stages for the 2009 Inaugural events began in August 2008, and the Newseum was quickly placed in the spotlight. It would soon become a main tourist attraction, and numerous media outlets would plan to conduct their programs on-site. This additional influx of visitors and events was sure to present some security challenges.

The security team was well aware that this was the prime location for media broadcasts and for visitors to capture the perfect view of the U.S. Capitol. With talk of record-breaking crowds, the Allied Universal team knew the Inaugural events were going to require the use of all resources and would be the ultimate test for the effectiveness of their training.

The high profile nature of these events required the security team to be extra diligent. This included checking for counterfeit tickets, ensuring all visitors passed through the magnetometers and had the correct credentials, in addition to many of their other daily tasks. As always, their goal was to ensure the safety and security of all individuals in the building while providing an educational and entertaining atmosphere – but crowds this size were going to be like nothing they had ever seen.

Allied Universal security officers are trained and prepared to handle customary event security; however, with millions of people descending on Washington, DC, extra measures were taken to ensure that the security during the Inauguration was seamless and efficient.

Allied Universal ’s security team met with the Secret Service, the Metropolitan Police Department and many other public and private organizations involved in security for months prior to the event. Allied Universal ’s highly-trained staff was prepared for the security challenges associated with the anticipated number of visitors. Newseum officials knew they were in good hands thanks to Allied Universal ’s commitment to quality personnel and training.

“The Allied Universal team is integrated with the rest of the Newseum staff,” added Thompson. “The security officers work very closely with our Operations department, which also includes 160 visitor service staff and 250 volunteers.”

Each morning the Operations department conducts a joint roll call for all staff, reviewing plans and goals for the day. Each division benefits from this, as they learn the duties of the other departments and are kept in the loop on Newseum functions. This was especially important during the week of the Inauguration, as every individual’s responsibility was critical, and the entire group needed to function as a team.

The Newseum and Allied Universal are equally committed to the importance of training. In addition to Allied Universal ’s training programs, the security officers take part in required CORE Training, provided in-house by the Newseum. This two-day course gives all new security officers a building overview, provides them with the history of the organization, discuss-es the content of the museum and helps them develop additional roles as customer service representatives.

“Our customer service role is very important to the success of the museum,” said Allied Universal Account Manager Paul Mason. “We work very hard with the rest of the staff to provide visitors with the best experience possible while at the Newseum. This was especially important during the Inauguration events. The crowds of people visiting the museum rely on our team for safety, information and response to their many needs.”

More than 25,000 visitors passed through the doors of the Newseum during the week of the 2009 Presidential Inauguration. And on the day of the event, more than 5,000 people were concentrated into areas with a vantage point to watch the events unfold. Additionally, nearly two million individuals were present in the nation’s capital on Inauguration day.

"We had to double our man power for the Inauguration, which included 28 officers on duty during each shift,” said Mason. “Our officers picked up extra shifts, and came in to work early and stayed late.”

The success of a high-profile event is a testament to the high-quality professionals working for both Allied Universal and the Newseum.

“The Inauguration would be a challenge for any security force. Our officers across Washington, DC, and the surrounding areas made us all proud that day,” added Toth. “Our location on the parade route, as well as the broadcasts and events taking place within the Newseum, created a very demanding situation. While our training is put to work every day, at every post, it really shines at a time like this when all limits are tested.”

The events leading up to and on Inauguration day went off without incident. “Our security officers do a wonderful job,” said Thompson. “Ninety percent of our visitors probably don’t know that they are a contracted firm. Allied Universal is very much a part of the Newseum staff.”

This can be attributed to Allied Universal ’s devoted approach to customer service, quality officers and a customized program, developed specifically for this museum.

According to Toth, Allied Universal continues to build a strong relationship, both professionally and personally, with the staff at the Newseum. “Our officers enjoy working at this account, and we have very little turnover. The Newseum has done a wonderful job helping to establish an environment where all staff functions as a team.”

“For us, it’s more than just scanning bags and tickets,” added Konjit Negewo, Assistant Project Manager. “We know the history of the exhibits and the building, and we work hard on our customer relations.”

“The security team is just as much involved in the daily functions of this building as anyone else,” Thompson continued. “We are certainly lucky to have them on board.”