A well-known port on the southern coast of Florida is home to more than 1,500 acres of upland and about 450 acres of submerged land.

On any weekend, more than 60,000 people gather at the port to embark to travel destinations. More than 4,100 ships call at this particular port in a year forming the basis of a diverse maritime operation that includes a thriving cruise industry, a growing containerized cargo business that establishes the port among the nation's top seaports, a major petroleum storage and distribution hub, and a favorite U.S. Navy liberty port. 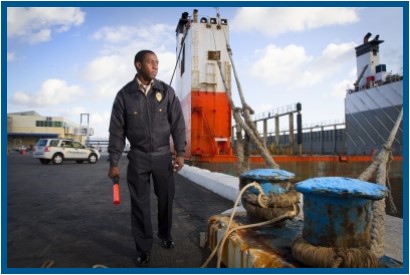 In 2010, the port began a search for a new security provider that could deliver a cost-efficient security program, but still meet the high-quality expectations set by the County Sheriff’s Office. The port was satisfied with the level of service previously provided by the Sheriff’s Office, but desired a more economical solution that continued to add value to port operations.

The new provider would need to be supportive of, and quickly establish, a collaborative relationship with the County Sheriff’s Office. The security manager for the port explained that they still needed to contract with the County Sheriff’s Office because the port is required to have a sworn deputy at each checkpoint. “The sworn deputies and the new security provider’s officers would have to work together to reach our goal of safety and security at the port,” he said. “We needed a security provider that could work collaboratively with the sworn deputies.”

“It is the port’s goal to maintain a safe and secure environment, but it is important that business is never impeded,” said the port security manager. “We have to uphold orderly security and safety for the port and there is a certain level of security that I demand. To go above that level would be difficult since we would then be infringing on the ability to get individuals and ships in and out of port and conduct business efficiently.”

With the large number of expected guests during the October through May cruise ship season, the security provider needed flexible scheduling for the security officers as well as enough officers to fill security voids. Officers are expected to provide internal and external perimeter patrols, access control, checkpoint security and traffic control. Customer service is also a critical component.

“The port is divided into various access points,” described the security manager.

“There are points that handle cruise ship and convention center traffic, petroleum storage and distribution hub traffic and areas where cargo enters and exits. We have a large area that is open 24 hours a day, 7 days a week, 365 days a year for the ships and individuals traveling or working. We need a security provider that can be there for the port at all times.”

After a thorough review of 27 responses, Allied Universal Security Services was selected in February of 2011 to create a hybrid security program. The transition was from a full law enforcement team to a combination of contract security and law enforcement officers. All security team members would work together and in conjunction with the port sworn deputies to create a safe and secure environment.

When the port’s security manager designed the post orders, he created a seamless transition in appearance and job responsibility. “I wanted to emphasize to the port employees that although the faces might change, the level of security would not be impacted,” he said. “Allied Universal’s services would be the same, if not better than our prior arrangement due to the partnership between Allied Universal and the County Sheriff’s Office.”

Allied Universal security officers would maintain a professional security appearance to help build the port’s brand and enhance their image. “The Allied Universal uniforms were specifically chosen to increase attention to security and safety, as well as support the brand of the port and have a nautical look,” said Richard Root, district manager, Allied Universal.

“To successfully achieve the smooth, and somewhat transparent transition, Allied Universal rolled the new hybrid program out in stages,” continued Root. “One of the stages was recruiting and selecting security officers with the experience to work in conjunction with the County Sheriff’s Office and help to strengthen the port’s security mission.”

The port required the security officers to be 21 years of age or older with at least three years of security experience or a military or law enforcement background. They also needed a Transportation Worker Identification Credential, otherwise known as TWIC, to work at the port.

After completing background screening, fingerprinting and drug testing, more than 100 security officers were selected to provide safety and security for the port. “At first there was a challenge for the incoming Allied Universal officers because they did not have the same authority as the County Deputies,” said David Macedo, government security project manager, Allied Universal. “However, it quickly became evident that Allied Universal has years of port experience and the ability to recruit and train quality individuals to lead the security program for this specific port.”

Allied Universal’s port experience and specialized training were critical to establishing a successful partnership with this port and the County Sheriff’s Office. Security officers assigned to this industry must meet specific training and credentialing requirements. Allied Universal’s port specific training and services allowed these officers to keep pace with the port and Sheriff’s needs from day one.

Each officer was first trained by Allied Universal and then received additional training on the Maritime Transportation Security Act by the contracted County Sheriff’s training group.

“We are able to provide an elevated level of detail while still being able to keep business operating proficiently,” said Macedo. “The level of security has been maintained because of the great work performed together by Allied Universal and the County Sheriffs.”

The port’s security manager is pleased with the level of security services as well as the Allied Universal security officers’ professionalism. “The officers are diligent and concerned about what they do and that is very gratifying,” he said. “Their efforts contributed to us winning a port of the year award because one of the components is how the individuals visiting the port are treated.”

“Individuals visiting the port understand the need for strict security so they are open to working with the security teams to ensure the port is safe,” he continued.

This port also received very high port satisfaction ratings by individuals and two cruise lines since Allied Universal has been on duty. “The security officers provide a high caliber of customer service from the moment an individual steps onto port property,” said Macedo. “We strive to make sure that each person is satisfied with their experience.”

“Allied Universal is very easy to work with and is always more than willing to assist with whatever is necessary to ensure the safety and security of everyone at the port,” said the security manager. “At the end of the day, we have a job to do and it is being completed with the help of Allied Universal.”

Note: Due to client confidentiality, we’ve withheld the client’s name from this case study.