Why AEDs are Important

Automated External Defibrillators (AEDs) are growing more and more popular in office buildings and public facilities where large groups of people gather. As more people learn about the benefits of AEDs, the number of devices in a given community is likely to keep growing.

AEDs are used on individuals who have suffered sudden cardiac arrest. Sudden cardiac arrest is the immediate and unexpected cessation of a productive heartbeat. According to the American Red Cross, 300,000 people fall victim to sudden cardiac arrest each year. Of that number, only one in 20 people survive. These deaths potentially could have been prevented if someone had initiated the Cardiac Chain of Survival. 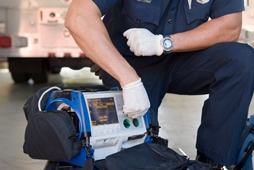 The Cardiac Chain of Survival consists of four steps:

The third step is recognized as the most critical step in restoring cardiac rhythm and resuscitating a victim of sudden cardiac arrest.

Portable AEDs make it possible for first responders, such as police, firefighters and security officers, as well as other rescuers who have been properly trained, to administer defibrillation.

How AEDs Save Lives

When a heart attack becomes a full cardiac arrest, the heart most often goes into uncoordinated electrical activity called fibrillation. The heart’s muscle fibers begin to contract individually and chaotically instead of together, and the heart stops pumping. According to the American Heart Association, a person’s chance of survival decreases by 7% to 10% for every minute that goes by without defibrillation. An AED is used to send a controlled electric shock to the heart muscle, momentarily stunning the heart and, hopefully, jolting it back to regular rhythm.

An AED analyzes the heart rhythm with a computer in just a few seconds and advises the rescuer whether a shock is required. If no shock is required, the machine doesn’t charge up, preventing an accidental shock. AEDs are proven to be 90% sensitive (able 90% of the time to detect a rhythm that should be defibrillated) and 99% specific (able 99% of the time to recommend not shocking when defibrillation is not indicated).

AEDs enable more people, such as security officers, to respond to sudden cardiac arrest emergencies and to help save lives!

For more information on AEDs…