On July 20, 2012, moviegoers at a theater in Aurora, CO, were seated for the 12:05 a.m. screening of the new Batman movie. Unexpectedly, a man began shooting. Those who were wounded were transported to local hospitals, including the University of Colorado Hospital. In total, 12 individuals were killed, and 58 wounded.

The emergency department at UCH started to receive phone calls from local police officers that patients involved in a mass shooting were being transported there. The hospital staff and Allied Universal Security Services security officers, who have been an integral part of hospital operations since 2010, were instantaneously notified of incoming victims and prepared for the worst.

“Allied Universal security officers who were already on duty for the night were able to assist nurses and EMS crews wherever they could, including helping to move victims from police vehicles to the emergency department,” said Jonathan Stanley, Director of Business Development - Key Accounts, Allied Universal.

The shock of this unthinkable event was quickly placed aside and everyone stepped up to help however they could. As more trauma patients came into the emergency department, the number of family members and visitors also increased. Each individual needed to be treated with the utmost respect. 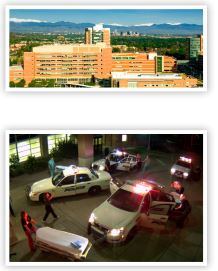 “Typically we have 12-15 security officers on site at UCH,” said Stanley. “We are able to bring in security officers from our pool of those who assist with the patient watch program we established with UCH. However, that still would not meet the numbers that our client, Tom Davis, director of facilities and security for UCH, was requesting. We also needed to make sure that all of the officers had the proper uniform and were properly trained and prepared to work in this environment, especially given the sensitivity of the situation and the high profile guests.”

Additionally, the request for extra security officers during the President’s visit was made 12 hours in advance of his estimated arrival. “We could not tell the team why they were to come in,” said Stanley. “It was a very confidential, high-profile situation and they all understood.”

In addition to these unique situations, the emergency department remained open for other trauma patients.

The hospital staff and security team would need to continue normal operations in spite of the tragic shooting, media and high-profile visitor.

The individuals who worked the additional shift to control the media were already familiar with UCH protocol and understood the situation that had unfolded in the early morning hours. Allied Universal was also able to meet the second request with 20 additional security officers 12 hours prior to the President’s arrival.

“It was a sudden decision by the White House that President Obama would be visiting with the families of the survivors still being treated,” said Stanley. “We did not have much time to bring on an additional 20 security officers, ensure they were properly uniformed and briefed on the situation.”

Many of the officers from the UCH support team volunteered to work extra shifts, including individuals from the team who proactively called in to ask if their services were needed throughout the weekend. Others from nearby Allied Universal client sites who were not scheduled to work at their usual location also accepted the important assignment.

“We have great leaders within Allied Universal that understood this sense of urgency,” said Stanley. “The security team needed to come together to help those in need in any way possible and provide whatever services were asked of them. These extra shifts weren’t looked at as overtime or just another regular shift, but rather a responsibility, their duty. These security officers were needed and they stepped up to take on the challenge.”

The local Allied Universal office was opened early on Sunday morning so security officers who had volunteered could receive the proper uniform for the site if they did not already have it. Those who were not regular staff at UCH were also briefed on the situation and the hospital’s security procedures.

The response to UCH’s needs went far beyond the security officers. The entire local team worked together to ensure security officers were scheduled, informed of the situation, prepared for their responsibilities and properly uniformed.

“There was a lot of behind the scenes work going on that many people did not see,” said Stanley. “The off-site local team was constantly making welfare checks on the security officers as soon as word spread that victims were being rushed to UCH. During the welfare checks, Allied Universal employees were able to relieve security officers as needed due to physical or emotional stress and ensure each individual was properly cared for at all times. It is Allied Universal’s goal to always serve the needs of our clients and employees.”

Allied Universal was able to efficiently meet UCH’s unique staffing requests quickly while making sure each security officer was prepared. Security staff was on site and ready to fulfill UCH’s requirements and understood the urgency and need for sensitivity. The Allied Universal security officers responded with the utmost respect for the situation.

“Due to the intense training that our Allied Universal security officers are required to complete prior to assignment at a post for the hospital, there was never a question of their ability to handle this mass casualty event,” said Davis. “The commitment and character of each security officer was evident in their professional manner and the way the event was handled.”

Allied Universal security officers also worked closely with the Secret Service prior to the President’s arrival at UCH.

“Allied Universal security officers were always within verbal communication range from the Secret Service agents, so we were able to work hand-in-hand with them, making sure we executed our orders properly,” said Stanley.

The team was flawless and the Secret Service agent in charge was impressed with the services Allied Universal and the hospital staff provided. During his tour through the hospital, the President also stopped to recognize our efforts.”

After the President left UCH, the Security Service agent in charge stated to a room filled with more than 40 individuals that he was thankful Allied Universal was able to pull together this effort in less than 12 hours when it normally would have taken six days to plan for an event like this.

Allied Universal security officers were also commended by the local police department on the great work they did during the initial crisis situation and the remainder of the weekend.

“It was a team effort,” said Stanley. “I am honored to be a part of this Allied Universal security team as we overcame many hurdles throughout this crisis situation. When we all pull together, anything can be accomplished.”