When it comes to a highly effective, flexible and collaborative security program for a college campus, the University of Pennsylvania’s model for campus security stands out as one of the most successful in the nation. A key success factor to the University’s plan to maintain a safe environment for more than 40,000 students, faculty and staff is its partnership with Allied Universal Security Services to perform a host of tasks that allow Penn’s Police Department to focus on their primary responsibilities of law enforcement.

Allied Universal has been a security partner with the University of Pennsylvania since 1996, when the Ivy League university in Philadelphia expanded the traditionally passive security guard assignments for campus facilities to an unprecedented tactical operation of providing patrol services on and off campus. Now, more than a decade since the pioneering campus security effort was established, the security partnership aimed at creating more visibility for security on and around campus has not only reduced crime, but is ever-changing, and ever-responsive to the needs on and off campus today.

In its expanding urban setting, the University of Pennsylvania seeks to provide safe streets for residents and business people who live and work in and around the campus. Expanded foot patrols, bike patrols, access control officers, sentry officers and escort officers have been added over the last 10 years. Another invaluable ally for both Penn and Allied Universal is the University City District (UCD), which was established to improve the quality of life of a 2.2 square mile area of West Philadelphia that touches the campuses of Penn and Drexel University.

Allied Universal’s security planning includes interaction with the UCD, especially in the deployment and utilization of Allied Universal officers and UCD Ambassadors where patrols overlap and provide mutual support. The high visibility of security officers gives the public a sense of security that has short and long-term effects. For the bad guys, it means they’re apt to be caught if they do something wrong.

Since first partnering with Allied Universal, Penn’s crime rate has shown consistent reductions. Through its crime mapping system, the University can identify and anticipate crime trends and make the appropriate adjustments to the police and security deployment, as well as when adaptations have to be made in security procedures. The flexibility of the Division of Public Safety and its close working relationship with Allied Universal, the University City District and the Philadelphia Police Department allow for immediate and strategic changes to cope with increases in crime. 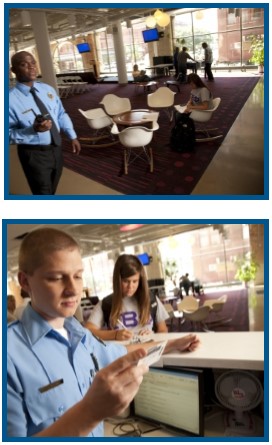 The flexibility built into the security partnership was successfully demonstrated in 2005, when an increase in robberies on the fringes of the campus called for more effective measures to stem the increase in crime. For Allied Universal, the challenge was to maximize both deployment and visibility. Working asa team with Penn’s top law enforcement officials, Allied Universal’s leadership group devised several changes to meet these goals.

The University, in consultation with Allied Universal, responded in a big way. Maureen Rush, Vice President for Public Safety, and her Division of Public Safety Leadership Team created Operation SAFE, backed by a pledge of $5 million from Penn President Amy Gutmann to fight crime around campus.

Other changes enacted by the University included: obtaining increased coverage by the Philadelphia Police Department; increasing and improving lighting; expanding the network of closed-circuit television coverage; and improving communication and education for students and community groups about safety tips, encouraging students to utilize the walking escort service and encouraging Penn’s Transit Escort workers to report suspicious behavior to police.

In her message to the community, University of Pennsylvania President Amy Gutmann said: “You have our word that we are addressing the issue of crime as aggressively and strategically as possible. Our entire team at Penn will work tirelessly and do everything within our power, including working effectively with our many partners, to enhance the personal safety of all of our community members. With our entire community working together, we will prevail.”

And prevail they did.

The added visibility and patrols helped to reduce crime in 2006 in the Penn area. That pattern has been maintained ever since. The new crime-incidents map on Rush’s desk shows Penn’s campus and surrounding area as an island of relative safety. Red dots indicating where crimes were committed are minimal in the Penn area, but take on the look of a severe case of measles in the surrounding areas of the city.

Compared to 2005, the year 2006 showed a 22 percent decrease in robberies in the Penn patrol zone.

The safety factor naturally extends into the community. The University has been very successful in recent years in creating incentives to encourage employees to move into the areas surrounding campus. They, like other residents, appreciate the added visibility of the yellow-clad Allied Universal security officers.

Allied Universal’s experience at the University of Pennsylvania proves that private security serves as a critical element of a successful campus security program. While techniques and procedures are always changing and dynamic to meet challenging situations, the cooperative partnership between Allied Universal and Penn’s Division of Public Safety sustains it-self through mutual respect, professionalism and pride.