At the time of this case study, the Pennsylvania Real Estate Investment Trust (NYSE: PEI), one of the first equity Real Estate Investment Trusts (REITs) in the United States, has a primary focus on shopping malls and power centers located in the Mid-Atlantic region of the eastern United States. As the Philadelphia-based company expanded in recent years to include 36 enclosed malls in 12 states, the growth brought with it new management, operations and security personnel who were guided by varying standards and procedures.

Prior to the engagement of Allied Universal, PREIT malls used several forms of security personnel, including in-house security, contract security and local police services. This mixed use of security coverage, while effective, resulted in a variety of standards and procedures that differed from mall to mall. As a result, PREIT saw a need to upgrade the manner in which its security personnel and policies were being managed. It initiated a two-year process of assessing proposals from national security service providers highly experienced in mall security. 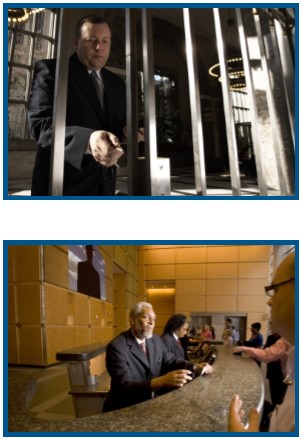 To raise the standards within its security program to meet or exceed those of its peers in the shopping center industry, PREIT selected Allied Universal as its contract security provider. The challenge was clear and precise.

An Operations Procedures Manual (OPM) was created and implemented to unify and standardize all security procedures so that every Security Officer, Shift Supervisor, Site Supervisor and Security Director/Account Manager was speaking and acting in the same manner. Incident and operations reporting systems were also standardized.

Allied Universal had to create a common thread, a unified system, and a sense of pride among all of its new security personnel working PREIT mall properties.

“Our challenge was to get everyone marching to the same drummer,” said Bud Bradley, Allied Universal’s Vice President, National Accounts Portfolio Management, who oversees the security program for all PREIT malls throughout the country.

Allied Universal’s mission to standardize security operations was not only successful, but also resulted in greater administrative flexibility for PREIT’s mall management. At PREIT, the security function is a component of mall management, overseen locally by each mall’s General Manager, and globally by PREIT’s Vice President of Retail Management.

While Allied Universal maintains strict controls, rules and procedures for its personnel, it communicates with PREIT’s Vice President of Retail Management on a regular basis with respect to all policies, procedures and general decisions. This partnership has proven to be most effective for both long-term and critical response to security applications.

To further enhance the security partnership, Allied Universal reports quarterly to PREIT’s Security Committee, which is made up of the Vice President of Retail Management, its four Regional Managers, and the Senior Vice President of Risk Management. The process allows the malls’ General Managers and Allied Universal personnel to perform with a thorough understanding of what is expected from each entity.

Proof of the company’s success in meeting the challenge of standardizing security operations has been reflected in overall “secret shopper” ratings at PREIT malls. The company operates a program known as C.O.R.E. (Creating Out-standing Retail Experiences), which provides periodic, unannounced operational audits conducted by an independent consulting firm to review all aspects of the mall’s operation. Security is just one part of the overall program. According to C.O.R.E. reports, the security services category is showing high overall scores.

As part of Allied Universal’s transition process, regional teams were created and assigned to visit every PREIT property to meet with the members of the security departments and assess immediate needs, while focusing on a smooth implementation of all new practices and procedures.

Within the first 60 days of Allied Universal’s new assignment, personnel at all of the malls were processed as Allied Universal employees. This process included extensive criminal background screening and drug testing. Within the first 120 days, all security officers completed On-the-Job and other site-specific training and certification, including use of the pepper foam, handcuffing, CPR/AED and first aid. PREIT and Allied Universal combined security best practices into one standard Operations Manual that was applied uniformly to all malls.

Additional Allied Universal transitional steps included in the overall process were the implementation of a new web-based incident reporting system, and standardization of uniforms and vehicle operations.

The review and updating of standard operating procedures is a fluid process, with changes reflecting the subtleties of national, regional and local trends.
Ronald R. Rabena, Allied Universal Division President, said the decision by PREIT to opt for contract security versus an in-house, proprietary operation reflects a growing trend by businesses today to re-think their security coverage.

“We see a shift to ‘core competency,’ which involves outsourcing support functions not associated with a company’s core business,” Rabena said. “This move is especially prevalent in the area of personnel-related support functions, which includes security services. Security administrators whose companies outsource their security operations often find they no longer have to spend endless hours dealing with the day-to-day management of security officers. Instead, they are able to offer their skills in support of their security operations. The responsibility of managing security personnel is that of the contract security firm.”